Not sure how long to cook and stir before your pasta is perfectly al dente? Just wait until the tunes run out.

In a clever new campaign this year, Barilla has launched eight of its own music playlists on Spotify, each perfectly timed to play just long enough to cook their pasta.

The playlists — which go by names like “Mixtape Spaghetti” and “Moody Day Linguine” — all last nine to 11 minutes depending on the shape of the pasta and the cooking instructions on the back of the box.

Symphony of spaghetti! Barilla has launched eight of its own music playlists on Spotify, each perfectly timed to play just long enough to cook their pasta 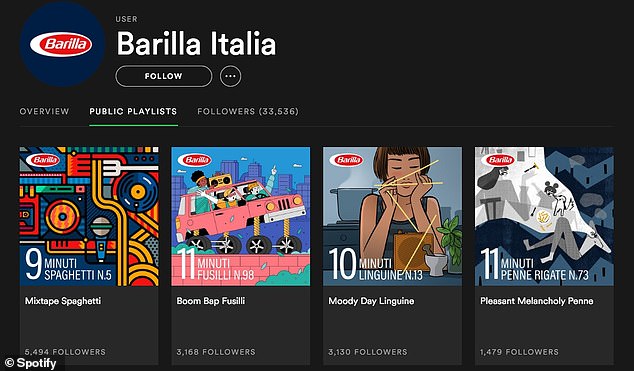 Radio Alfredo: Playlists are all nine to 11 minutes long depending on the shape of the pasta and the cooking instructions on the back of the box 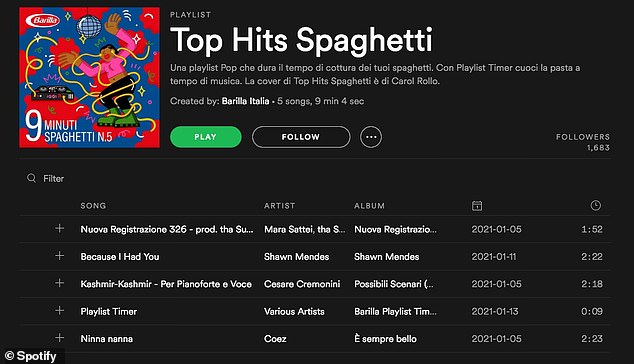 Noodle bops: they have names like “Top Hits Spaghetti” and “Moody Day Linguine”

‘Playlist Timer’ on Spotify can replace any microwave or smartphone timer, but adds a little more fun to the cooking process.

“Playlist Timer is a series of playlists whose duration matches the cooking time of Barilla’s most popular pasta shapes,” Publicis Italy said in a statement.

‘[It’s] a real kitchen timer on Spotify that turns the wait into a chance to listen to great music, be entertained and discover playlist covers, illustrated by eight world-class Italian artists.

Spotify offers two playlists for each of the different types of pasta. 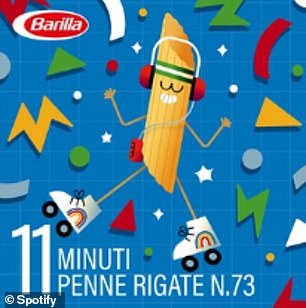 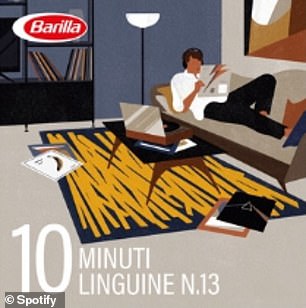 Creative! The illustrations in the playlists – each featuring images of pasta – were all created by Italian artists 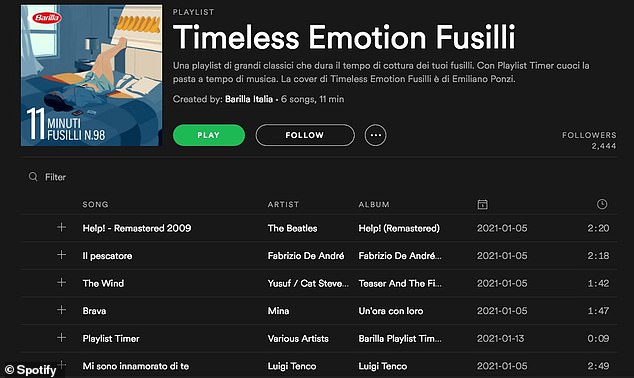 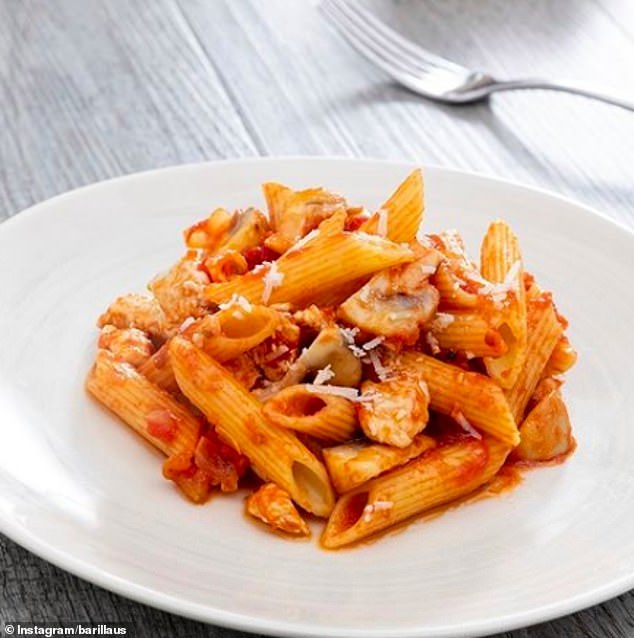 ‘[It’s] a real kitchen timer on Spotify that turns the wait into a chance to listen to good music, be entertained and discover the covers of playlists, illustrated by eight Italian artists of international caliber’

‘Top Hits Spaghetti’ also plays for nine minutes and includes Shawn Mendes’ Because I Had You.

10 minutes away are ‘Moody Day Linguine’ and ‘Simply Classics Linguine’ which include Birthh’s Supermarkets and The Beach Boys’ God Only Knows respectively.

According to Design Boom, the illustrations for the playlists — each featuring images of pasta — were all created by Italian artists. 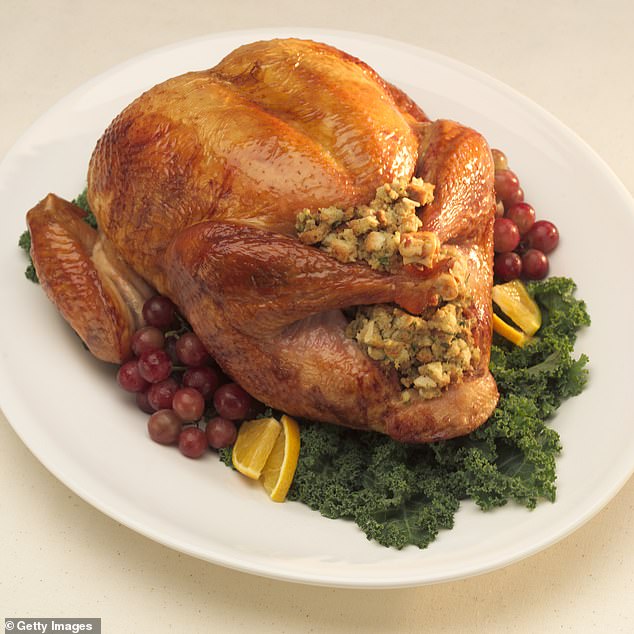 What’s cooking? Spotify’s Turkey Timer offers Thanksgiving playlists that last exactly as long as it takes to cook your turkey 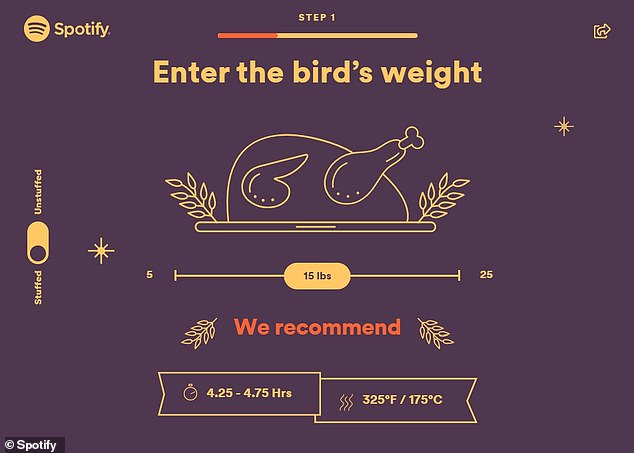 All about your bird: the tool allows users to select the bird’s wait, and whether it’s stuffed or not, to determine how long it should cook

Spotify also has other cooking timers, including ones that are perfect for Thanksgiving.

The music streaming service’s turkey timer runs for exactly the amount of time it takes to cook your turkey.

Using their handy tool, users simply select the weight of their turkey and whether it is stuffed or not, and the application recommend what temperature to cook your turkey at and how long to roast it.

Then users choose a genre – R&B, country, oldies, holiday, Latin or pop – and the The site will then spit out a suitable playlist, each with a fun name for cooking turkey.

The pop list is called Bastin’ and includes hits from Ariana Grande and Drake. R&B fans get all the seasoning for music from Mary J. Blige and Bruno Mars. 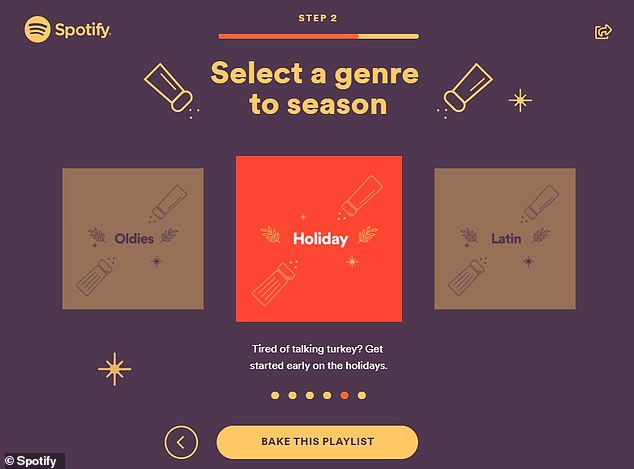 Set the mood: After entering this data, the user selects a type of music, such as pop, R&B or holiday tunes. 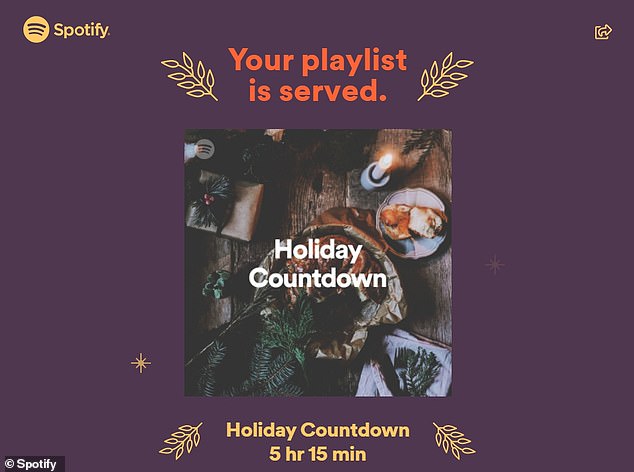 Genius! Spotify then offers a perfectly timed playlist for the cooking time of a turkey

Country fans get Deep Fried for tunes from Luke Bryan and Rascal Flatts, while oldies fans can listen to Fam Faves, which plays everything from Demi Lovato to Aretha Franklin.

Spotify also recommends playing playlists without shuffling, as the last track is a reminder to take the food out of the oven.

And when it’s all said and done, there’s a “Stuffed Snooze” playlist, “to help you snooze once the leftovers are put away.”